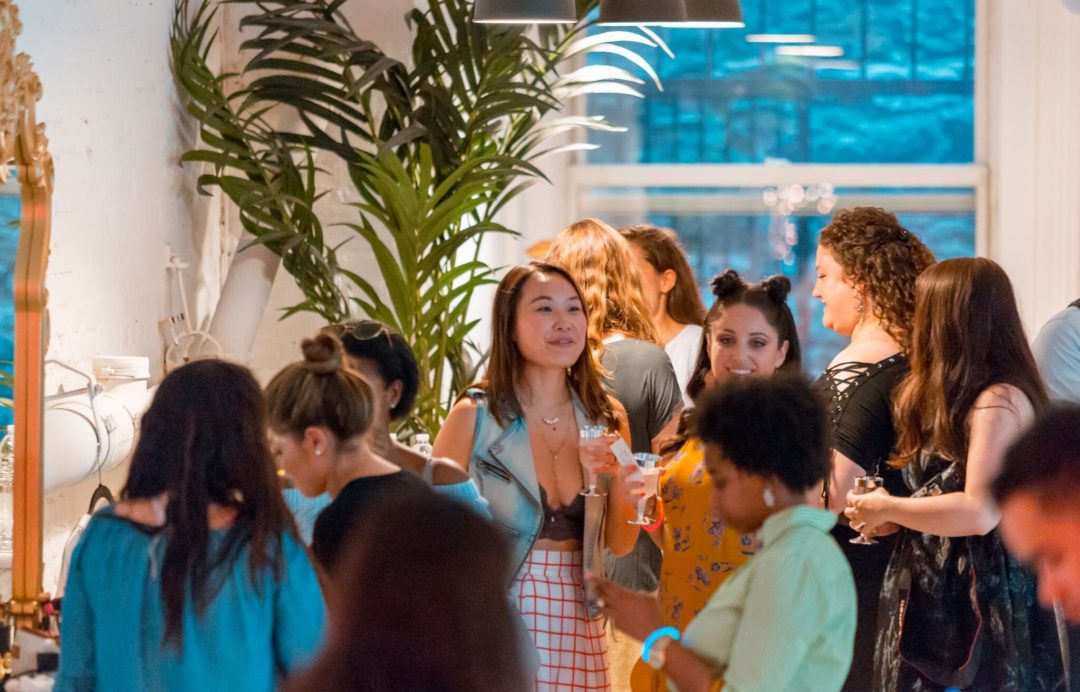 Last Tuesday, on June 13th, 2017, ShopDrop hosted a VIP launch event for members of the press and awesome Instagram Fashion Influencers. The event was co-sponsored and hosted by Katya Dobryakova, a boutique store in SoHo. 100 individuals joined to celebrate the discovery of sample sales and the democratization of fashion in NYC. If you’re familiar with the SpeakEasy concept, you can comprehend how magical the Katya Dobryakova store was. You walk into a small SoHo shop, present the password and vwala! : Mirrors are moved aside to reveal a hidden entrance to a deep stairwell, leading to a massive party hall with blasting music, lights and a special selection of fine white and red wine from The River Wine. With the help of MonaLiza studios, the room was decorated with the most exquisite hand-made furniture.

The event featured many exciting and unique events, indicative to the NYC fashion community. There were many highlights to the program. First, the fashion show. Over ten women including both professional models as well as regular professionals took on the runway of all colors and sizes joined our runway to make a statement. Each model wore a gown from a different sample sale: As she walked down the runway, the full retail price and sample sale price were announced, emphasizing the steep discounts sample sales offer. Thank you to Valeria Bystritskaya, Miss Germany and to Stephanie Chernick, Miss New York for gracing us with your beautiful presence. Gowns on the runway were sponsored by Clothingline, JenX, Nineteenth Amendment, Pour L’Amour Boutique & Sarit Ebrani. Brands represented included Escada, Alice & Olivia, J. Mendel, Nineteenth Amendment & Carmen Marc Valvo.

We kicked off the evening with a ribbon cutting ceremony to represent the launch of ShopDrop, and welcome a summer of sample sales in the city!  Risa Cohn from NYU Summer Launchpad, Miss NY & Miss Germany, Cory Bishop & Bill DeMuro, original ShopDrop founders joined together to cut the turquoise ribbon,  encouraging loud applause from the crowd.

The party was not simply music and wine, we had a large array of different booths and activities to engage with.

ObsessVR, a cutting-edge startup in virtual reality for fashion, had people watching fashion week in real-time!
Fashion illustrator, @Brith_BELT scetched fashionable caricatures of each individual guest, a calligrapher made special bookmarks with people’s names on them. @MakeupGoldie stole the night by applying gold foil and turquoise lipstick to all the guests for a funky, grammable look. The wine from The River kept on flowing and DJ Dopamine infused the night with some serious party energy with his light effects and pop music.

No one left the party without a phenomenal swag bag filled with goodies from our generous sponsors. Thank you to both our sponsors and amazing VIPs for making the night unforgettable.

For more details and with any questions, reach out to estee@shopdrop.app

Find out about awesome sample sales through the ShopDrop App and here!